Whether you are interested in more information about a loved one or simply want to learn, here is a glossary of definitions related to our field.

Some diagnoses that might be considered a developmental disability include mental retardation, cerebral palsy, epilepsy, spina bifida, autism or a neurological impairment.

The injury commonly results in a change in neuronal activity, which affects the physical integrity, the metabolic activity or the functional ability of the cell. These changes in brain cells then affect thinking, feeling, behavior and the ability to perform in everyday life, including:

Brain injuries can include both traumatic and non-traumatic causes:

Special Needs
The term, special needs, refers to people who may have a wide range of barriers. These barriers can include those who have intellectual or developmental disabilities, mental illness, a physical disability or someone who is blind, deaf or hard of hearing.

Autism
Autism Spectrum Disorder (ASD) or autism is a developmental disability considered the result of a neurological condition affecting normal brain function, development and social interactions. Children and adults with autism find it difficult or impossible to relate to other people in a meaningful way and may show restrictive and/or repetitive patterns of behavior or body movements. While great strides are being made, there is no known cause, or a known singular effective treatment for autism.

There are five developmental disorders that fall under the Autism Spectrum Disorder umbrella and are defined by challenges in three areas: social skills, communication, and behaviors and/or interests.

(2) Asperger’s Syndrome: sometimes considered a milder form of autism, Asperger’s is typically diagnosed later in life than other disorders on the spectrum. People with Asperger’s syndrome usually function in the average to above average intelligence range and have no delays in language skills, but often struggle with social skills and restrictive and repetitive behavior.

(3) Rett Syndrome: diagnosed primarily in females who exhibit typical development until approximately five to 30 months when children with Rett syndrome begin to regress, especially in terms of motor skills and loss of abilities in other areas. A key indicator of Rett syndrome is the appearance of repetitive, meaningless movements or gestures.

(4) Childhood Disintegrative Disorder: involves a significant regression in skills that have previously been acquired, and deficits in communication, socialization and/or restrictive and repetitive behavior.

(5) Pervasive Developmental Disorder Not Otherwise Specified: includes individuals  that do not fully meet the criteria for the other specific disorders or those that do not have the degree of impairment associated with those disorders.

Down Syndrome
Down syndrome is a chromosomal disorder that occurs when an extra chromosome (chromosome 21) is present in either the sperm or the egg at conception. There is no standard profile of a person with Down syndrome and not all people who have the disorder have severe mental retardation. Most people with Down syndrome have mild to moderate mental impairments and are able to live productive and satisfying lives in their communities.

Cerebral Palsy
Cerebral palsy is not a disease, but a condition caused by damage to parts of the brain that control muscle coordination, balance and purposeful movement. Most commonly, injury occurs to the developing brain of a fetus or newborn. Preventive measures are increasingly possible, and include ensuring the well-being of mothers prior to conception, adequate prenatal care and the protection of infants from accidents and injuries.

Individuals with cerebral palsy may be affected differently, depending on the specific areas of the brain that have been damaged. Muscle tightness or spasm, involuntary movement, and disturbance in gait and mobility are common effects. Individuals also may experience abnormal sensations and perceptions; sight, hearing or speech impairment; seizures; and mental retardation. Related problems may include difficulties in feeding, bladder and bowel control, difficulty breathing due to posture, skin disorders from pressure sores, and learning disabilities.

Spina Bifida
Spina bifida is a birth condition characterized by an incomplete closure of the spine. Children born with spina bifida may have varying degrees of muscle paralysis, bladder and bowel problems, loss of skin sensation and spine and limb problems.

Although spina bifida occurs in different forms and has varying degrees of effect, most babies born with the condition will require surgeries to correct spinal, foot or leg problems; shunt surgery to drain fluid from the brain; application of techniques to control bladder and bowel function; and braces and other equipment to assist in walking. Nevertheless, advances in treatment and management have made it possible for children born with spina bifida to live long and productive lives.

Stroke
A stroke occurs when the blood supply to the brain is suddenly interrupted or a blood vessel in the brain bursts, spilling blood into the spaces surrounding the vessels. A stroke may bring weakness or paralysis to parts of the body and can result in problems with vision and speech, as well as fear, confusion and disorientation. The blockage of, or hemorrhage from, the blood vessels to the brain that occurs during a stroke can cause either temporary or permanent brain damage. In either case, rehabilitation is of the utmost importance to the recovery of the stroke survivor as it is designed to help him or her return to independent living. 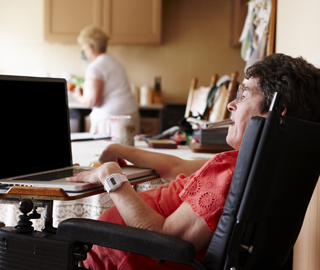 “Individuals, families and
QMA staff truly work together
to create meaningful lives
for people with disabilities.”